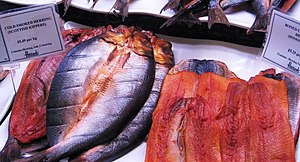 Traditional red herring, after being cold-smoked.

Red Herrings are misleading elements of a mystery or puzzle, intended to lead the solver down an incorrect path or temporarily distract from the correct path. While less common in puzzles as an actual element, the phrase itself shows up quite often.

While there is no fish species known as a "red herring", the phrase does originate from fish as a whole. The first known use of the term to describe a fish came from a mid-13th century poem titled The Treatise, in which mention is made to "herring red". It's likely that this, and later references to red herrings refers to fish that have been exposed to a strong enough brining process that the fish's flesh turns a bright red.

Knowing that, the use of "red herring" to refer to intentional misdirection makes more sense. The popular origin is with William Cobbett , a prominent English debater who in 1807 told a story about hounds chasing after a rabbit when he was a boy. As he told it, he used smoked fish (red herring) to distract the hounds and put them off the rabbit's scent. While the story itself may have been false (as doing so was not common practice, and was unlikely to have actually worked to permanently put dogs off of the scent), the idea was used as a metaphor to illustrate the dangers of being distracted from one proper goal. The phrase stuck around, especially after the story was perpetuated by his son in further writings, and is used in debate, literature, and puzzles to this day.

Use in Media[edit | edit source]

Red herrings in the traditional sense are actually quite rare in modern hunt puzzles. It's commonly said that intentional red herrings should be avoided when writing a puzzle, as solvers will find enough of their own to follow. That being said, the phrase "red herring" has become something of a staple within puzzle hunts.

The words "Red Herring" have become synonymous with "Ignore this piece of information, it's not useful to you". Thus, red herrings in puzzle hunts are rarely intended to deceive; rather, they are a sincere (if humorous) warning to not subject oneself to needless confusion. Leaning into the humor of the phrase is also quite common, with writers finding more and more creative ways to say "This is a red herring". These include:

Hunt puzzles are not exempt from unintentional red herrings, however, and writers should be careful to fact-check and testsolve their puzzles whenever possible to avoid widespread misunderstandings amongst solvers.

Retrieved from "https://www.puzzles.wiki/w/index.php?title=Red_Herring&oldid=4684"
Category:
Cookies help us deliver our services. By using our services, you agree to our use of cookies.