Corral, also called Bag or Cave, is a path-drawing logic puzzle in which solvers must fill in a loop along the perimeters of cells in a grid so that numbered clues properly indicate the number of cells visible from their position.

Corral first appeared in Puzzle Communication Nikoli, volume 60. The genre was invented by ゲサク ("Gesaku") with the title of バッグ, which means "bag". The genre was originally presented as a loop puzzle.[1]

Closely related genres to Corral include Kurodoko (instead of a loop, shade squares in a "dynasty" formation instead) and Canal View. 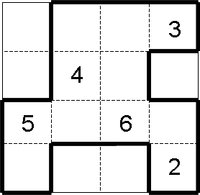 Corral puzzles are usually presented fairly minimally, usually only as a blank grid with some cells containing numbers. The goal of the puzzle is to create a 'corral' that contains all numbered cells and satisfies the constraints set by them.

The rules for solving a corral are as follows:

Visually, a Corral puzzle may appear very similar to a Slitherlink puzzle. A good way to tell them apart is that Slitherlinks can only contain number 0-3, while Corral can have any number from 2 to the sum of the dimensions of the grid minus 1.

Retrieved from "https://www.puzzles.wiki/w/index.php?title=Corral&oldid=6776"
Cookies help us deliver our services. By using our services, you agree to our use of cookies.